Chief DiSanto began his career as a 911 call taker and Dispatcher and was later promoted to a full time Patrol Officer with the Shelburne (VT) Police Department. DiSanto attended the 74th Basic VT Police Academy class.

After moving to the Northeast kingdom in 2009 with his wife and now 2 children, he became a Patrol Officer, an undercover Detective in the VT Drug Task Force, and a Patrol Sergeant with the Newport Police Department.

In 2012 DiSanto received a promotion to Chief of the Newport Police Department. DiSanto has a Bachelor’s degree from Elmira College in Criminal Justice, has served as an associate professor at Community College of VT, is a Vice Chairperson of the VT Association of Chiefs of Police and an active community and church member in the Northeast Kingdom area. 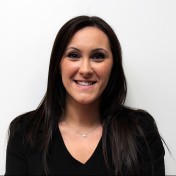 Chelsea Belliveau is a former JGPR employee who served as Digital Services Manager. She worked for the company from Jan. 2015 to Aug. 2018.